Dusshera as a festival perhaps doesn’t need any introduction for anyone born and brought up in India. I know its a little late to make this post (considering that it was celebrated for this year on October 24) but going by what I saw on road that day, I guess it is still worthwhile to express what I felt.

Every year there is a procession which passes through the street where our house is situated. It comprises of brass bands playing religious tunes followed by floats and horse carriages and tractors with trolleys carrying idols and people dressed as Hindu deities seated on the floats. This procession takes a pre-defined path from the city temple onto the Ramlila ground where an effigy of Ravana is erected to be burnt at dusk marking the victory of good over evil.

It was around mid-afternoon on the day of Dusshera, when like all previous years, the procession turned into the street. Its arrival was marked by the sound of drums and the brass band which could be heard from far away. I normally wouldn’t even have bothered stepping out to see it if my dad had not managed to pass it on his way back home and hadn’t specifically asked me to come and watch it.

The procession had changed into a different garb altogether this year. This year for the first time I was witness to a song and dance number sequence by actors/dancers dressed as Hindu deities atop the make shift stages on the back of tractor trolleys apart from the usual carts, carriages and tractors. These makeshift Gods were dancing to the tune of huge blaring loudspeakers powered by equally large generators who mercilessly coughed up black diesel fumes as they stuttered across the narrow road.

Watching these ‘Gods’ on the wooden plank pulled by a ghastly tractor, dance to Hindi movie songs was not only appalling to one’s religious sentiments, it was also painful to see this interpretation of a religion rich in its lore and mythology being reduced to a road show of popular demand.

The people on the road were both amused and bewildered at such a sight, probably not knowing whether to see it as a free dance performance or join their hands in reverence. I don’t know if this is another example of metamorphosis of the cultural heritage and changing social norms perhaps for worse or the growing resonance of the need to package and market everything including faith and religion.

I clicked a few pictures and recorded a short clip using my phone from the roof of my house. Check and share your sentiments in the comments section, if you care. 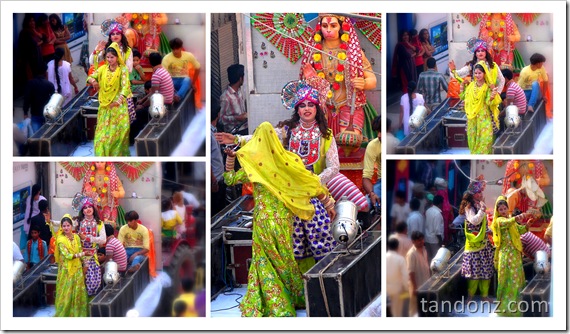 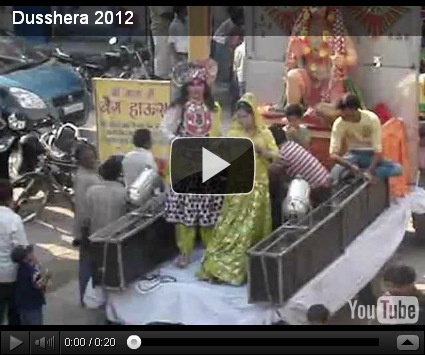