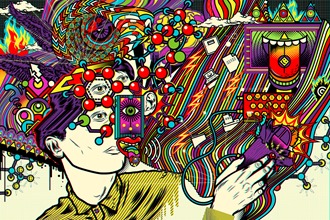 A sleepwalker ran into a dreamcatcher at a crossroad and burst into a thousand tales. They were simple stories from years gone by, flanked by sepia imagery and gentle breaths, floating on a stream of pain and sad endings. I sat and listened to all I could before I started drifting between the worlds.

Struck by a bout of severe flu, I have been hallucinating under the effect of a concoction of prescribed pills. The last couple of days saw me doze off intermittently during the afternoons. Between these hallucinations, I realized that when we cut ourselves from this world, we release our years caged inside. The universe within us, is enigmatic, enchanting and offers a thrill that the world outside can never offer.

The delirium opens up new possibilities – beyond what is visible, lies the extraordinary. I soaked myself in that shower several times during the day until I could no longer tell where the dream ended and the reality began.

I saw people and places that have been swept away by tides of time and no longer exist. I walked through the dusty lanes to see friends living in an era of carefree Sunday mornings, dancing to the songs playing on a radio. I found myself looking at a boulder where I had crashed my bicycle once and when I turned around I saw that the letter box I used to drop my postcards in was standing tall, shining and freshly painted.

I used my flipping pain as an excuse to slip into this realm of forgotten, insignificant memories and to relive the years gone by. The delusional afternoons worked like a time machine, a story teller, an oracle guiding me through the days of my life all at the same time.

The weekend that followed, brought down curtains on this run. I wasn’t delusional anymore and realized that the morbidity of the mundane life was a greater suffering than the viral infection that ailed me. Perhaps, blessed are the people who stay oblivious to the abstract and are consumed by the superficial because once you get stung by this inner serpent, there are no exits back into the domain of logic and reason.

The spell has been broken for now. The rainbow has been switched off and the bright sunshine engulfs the timid joy of fireflies on the banks of my river. I spent a week from my life and made a withdrawal on the years I had deposited in my tiny pockets as a child. It was good to see myself once again, running freely in my rubber slippers through the dusty, brick lane – a lane that has since then melted into a cemented turf and taken over by unruly traffic.