Happened to catch Dev D yesterday and found it to be probably one of the better told renditions of the original novel and yes, one of the most honest and blunt, in your face kind of movie that got my gray cells reeling during the entire sitting. 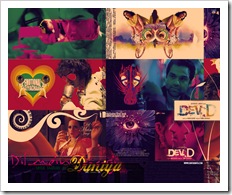 I am not going to talk about the technical aspects of the film or its non-linear narration or the unusually creative cinematography or the real life sets (be it the flowing drains in the streets of Punjab or the grimy brass faucet in the bathroom of the hotel where Devender Dhingra (Sorry Dev D) lives).

I shall only talk about a few selective aspects of the film which to an extent were path breaking and stand out in particular. I am sure they would shake a typical Hindi movie goer's belief and faith in the stereotype situations and run of the mill dialogues and scripts that one has been so accustomed to see over so many decades of Hindi cinema now that it some how seem to have seeped into the blood stream of the audience now.

If I were to single out a few special highlights of the movie, I would list them as following:

However the best part of this version of the story was that this film somewhere finally accepts that Sarat Chandra's Dev is a selfish and egoistic character who is not only promiscuous in his dealings but also only in love with himself and that he finally did not kill himself as in the other two previous adaptations but lives to make amends and change things for himself (well he did get a bike riding 'Chandramukhi' which is a very fair (literally) motivation).

The Times of India rated it as

which is what prompted me initially to buy the tickets. I do not quite agree with their rating actually. The film though is not any emotional 'atyachaar', it does question your normal sensibilities at multiple points. I guess some part of that is attributed to the way the characters were sketched in the original novel but then if the story teller has the audacity to let Paro ask for the keys to a servant's room for intentions of a romp, it sure could have mellowed down the lows that our dear Dev D hits.

Also, the country has already seen a lot of MMS scandals now and the way our 'Chandramukhi' makes her career choice was far too conventional and orthodox 'Hindi cinema' to gel with the overall treatment of the movie. But then again if Chandramukhi doesn't get to be a woman on the street, but say some petty receptionist in a shady office, the story would have been lost. After all Dev D would not visit the office looking for a peon's job would he? Specially when he has all the money in the world to burn on Vodka, Nose Candy and a BMW (and that too when he is busy doing nothing).

I do have a few questions now when I come to think of it again. After all who gets a heart burn these days to finish off crates of Vodka for a girl who, one gets to meet after a decade and don't tell me the hero did not have a fling or two while growing up or while he was in high school or college (Hmmm).

I guess all our Hero needed was a regular 9 to 6 job and that too probably in a Bank or a Financial institution in these times of recession and things would have worked out fine for him. He sure would have enough things to worry about all day long to take out time to think about missing out an Ex-flame being married to some one else. 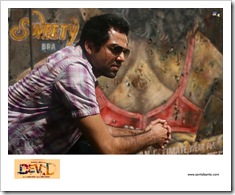 Anyway, that's enough worrying already. Go watch the movie if you still have the inclination or maybe wait for the DVDs to be out. None the less, do download the soundtrack as it sure rocks.

Nive review. I saw the movie and loved it. It breaks the stereo type at a lot of places and thats what special about the film. The music is great so are the music vedeos.

Nice Review. Though movie was different, it was still atyachar. How many Vodka can DevD actually have in 1 movie?

hmm...I guess I should better see the movie first for a better understanding of the post... :(