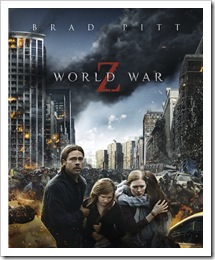 I wouldn’t go as far as proclaiming ‘World War Z’ to be some sort of zombie magnum opus as the media is making it to be. Honestly, I walked out of the theater just as about the credits began to roll, feeling a little disappointed. Perhaps the trailers for the movie playing on the TV had kind of spoiled all special sequences beforehand. Personally I felt it was Matt Damon, Jude Law’s Contagion rolled into Will Smilth’s ‘I am legend’ and that isn’t really wholesome entertainment to write about if you ask me but somehow the core of the movie was spiced up perfectly with right grilling and precise amount of special effects to avoid being a total washout.

To give the film its due credit, I think it began reasonably well with the opening scene on the streets of Philadelphia where an ordinary day suddenly turns into hellish nightmare for Gerry Lane (Brad Pitt), his wife (Mireille Enos) and their two daughters (Sterling Jerins and Abigail Hargrove) as they run into first zombie sighting in the movie with huge traffic jams, a street-explosion, whizzing cops, a truck overrunning several cars and finally one zombie biting and transforming another human being in a matter of seconds and then predictably crashing up against the windshield of the car the hero is driving.

I have been an ardent fan of the Zombie genre and all horror in general and fast paced rabid zombies (unlike the dumb slow ones we have seen in other movies and most recently in Go, Goa, Gone) were both unique and scary, at least until the first half. However, apart from the two sequences where a tsunami of zombies scales a giant wall in Israel and the one where the aircraft is torn midway to have them flying out and finally the crash, everything else really appears to be a little stale. 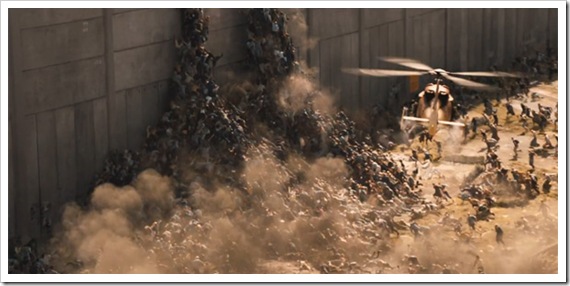 While the director Marc Forster (who has previously done movies like Monster’s Ball, Finding Neverland and Bond thriller Quantum of Solace) tries to scale the Max Brook novel "World War Z: An Oral History of the Zombie War" to an epic level, the overall effort though not an utter failure, isn’t really the cauldron for a cult classic either. 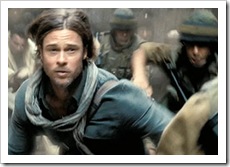 As far as the individual performances go, Brad Pitt, who has also produced “World War Z” under his production company Plan B, does reasonably well as a former UN employee recalled back to duty (another cliché) to save the world and his family. I guess he is one of the few recent stars who has evolved as an actor to portray several multi-layered characters with ease and he does well in this outing as well even though his character was largely one-dimensional. 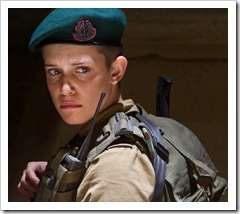 The only other character to really stand out was that of Israeli soldier Segen played by Daniella Kertesz. She is new, refreshing and promising even in her supporting role despite being granted only a handful of dialogues in the movie. But then, what else can one expect when the main protagonist has the responsibility of saving the entire planet resting on his shoulders. She does fairly well if you do not consider that her shooting skills are not impaired and pain really doesn’t deter her from wielding a shotgun even if she had one of her hands chopped off few hours ago (true filmy).

To sum up, this is a 6 out of 10 movie with a couple of really good FX sequences and individual performances.

PS: The ‘Z’ in World War – Z is for Zombies, but then it could be sound of your sleep song (zzzzzzz) if you are not really the one to dig into this genre specifically.