His mouth was gagged with a piece of cloth and his hands and legs were tied to the metal bed. He tried screaming but his voice failed to escape his throat. He struggled to free himself of the canvas belt that he was tethered with, until his body couldn’t fight any more. He felt suffocated and exhausted and his mind swirled with emotion and anger.

He could see her standing motionless, looking at him without an expression on her face as a group of men gathered around his bed. He wanted to reach out to her, hold her hand and ask her to get the men to free him. He was confused about why she wasn’t doing anything – crying, screaming or fighting for him? As he struggled with his restraints and battled for every breath, she stood in silence, just looking at him with a straight face. Was she a part of this whole gang that had held him in that room against his wishes? He couldn’t tell anymore.

He remembered going to bed with her last night, tucking her in as usual and playing with her hair till he dozed off. He thought of her radiant skin and the way she smelled like fresh lavender. He had spent endless summer afternoons sitting by her side on the front porch, sipping on his iced tea and talking to her about his days in the army and sharing other tales of yore. He recalled spending the most beautiful moments of his life in her company despite having travelled the world.

He tried calling out to her again but couldn’t gather enough strength. He felt a sharp stinging pain in his arm. He was probably given an injection and he felt light-headed soon after. The drug got him hallucinating. 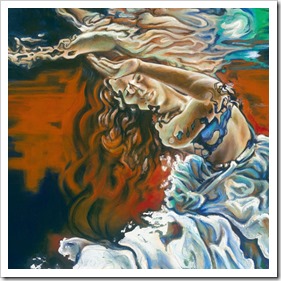 He could see his whole life flash before him but failed to connect the events. He remembered his old family cottage by the lake and how his children had moved out over the years to live in the city. He could see the land he tilled with his workers and how they would bring in the produce, making multiple rounds on the little tractor he owned. He recalled his early days as a child in his forgotten old hometown. He knew pretty much everyone who lived there and remembered meeting people on his daily walk to the church and the grocery store. His routine worked for him like a well-oiled machine. The local butcher and grocer would deliver at his door step and he had a maid come in to clean and cook for him every day. In fact, he was so settled in his daily routine that he hardly ever saw the need to step out of the house.

And she never complained too. They would wake up together and he would bring her breakfast in bed. She would sit and listen to his stories all day long and never disagreed with whatever he had to say. With age, he had become forgetful and at times, would repeat the same story over and over, but she never quarreled or got impatient with him. He often wondered how she still looked young and the same as she did years ago, while he continued to add wrinkles to his face. He reasoned that he was just lucky to have found her and have her in his otherwise solitary, mundane life.

Now he couldn’t comprehend why she would conspire with these strangers to have him bound and gagged and injected with chemicals in his body? What did she want all along? His mind seemed to be playing games with him. The lights in the room went out on him completely and he felt like he was being pushed into an endless hole. He lost track of time and place and soon lost consciousness.

It must have been hours or days before he woke up again. He couldn’t tell. He felt famished and stiff. He tried to sit up but felt weak. He looked around and gathered he was in some sort of a hospital. There were intravenous drips going into his body and some machines plugged in. He tried to raise his arms and realized he was no longer tied to the bed. Had he felt sure of his feet, he would have attempted to run away. Realizing that there was no imminent danger to his life, he summoned enough courage to call for help but could only muster a gasp. He felt helpless and a lone tear trickled down his cheek. Perhaps they had some sort of a surveillance device or an alarm connected to his body because he saw someone walk into the room just a few minutes later.

An elderly man with soft features and grey hair, perhaps a doctor, came in and checked the readings on the machines before walking closer to him and enquiring about his well-being. His voice was gentle and he came across as someone who could be trusted. The doctor patted his shoulder, assured him that he was going to be fine, gave him an injection and went away.

The next person who came in was none other than his own son.

“Where is she?” he mumbled feebly. “Why is she not here?” I have been battling with all of you for years now to let me be and yet you continue to torment and torture me? I want to go back to my house now.”

His son leaned close to him and said, “Dad, you will be fine. We have all been very worried about you all this while. I always told everyone that living alone out in that cottage would take a toll on your mental health. It was only after one of your workers called me one afternoon and informed me about how you sat out on the porch all day talking to yourself, that we all decided to step in. I checked with your maid and your friends around town and they all said the same—that you have been wandering about talking to yourself as if you were seeing things or speaking to a ghost.”

He continued after a brief pause. “Dad, we all love you and want the best for you. Luckily, we found Dr. Smith here who felt there was a great chance for your getting better. Now, it seems like our prayers have been answered. I am sure all your hallucinations will go away and you will be fine.” His son smiled as he finished talking.

“Where is your mother, she was standing here watching me that day? Where is she now? How could she leave me alone like that?” He couldn’t speak further and felt short of breath.

His son seemed puzzled. “Dad, mom passed away eight years ago. We kept telling you to come and live with us but you insisted on stay in that cottage, next to the graveyard where she is buried.” He looked at the elderly doctor who had returned to the room and was standing next to the bed.

“No, she was here, right here…” he tried to raise a finger in the direction where he last saw her and a tear trickled down his face. “Of course,” he paused and then whispered, “Of course, she isn’t here. She couldn’t be. I know, I remember now…” He closed his eyes and was silent.

The doctor consulted his charts and the readings on the machines once again before turning towards the son. “You have nothing to worry about now, the procedure was successful. We will keep him under observation here at the institution for a few more days of rehabilitation as well. You can take him home with you after that. Congratulations, your dad is now cured.”

My family members always say that I am killing my time here at web, however I know I am getting know-how every day by
reading thes good content.