“Did you know magenta is not a color?” she said

“Magenta is not a color since it doesn’t appear on the spectrum of visible light. It is just something that our brain perceives as NOT Green” she replied emphatically.

”And who is telling you this, a WhatsApp group?” he mocked.

”No, silly. It has been proposed in an article titled ‘Magenta ain’t a color’ on The Neuro-stimulation Technology Portal by Liz Elliott.” She replied and pulled out a little image on her cellphone. “See here, check this out.” She handed over her phone to him. “See there is no way blue and red mix in the spectrum and hence magenta isn’t real”. 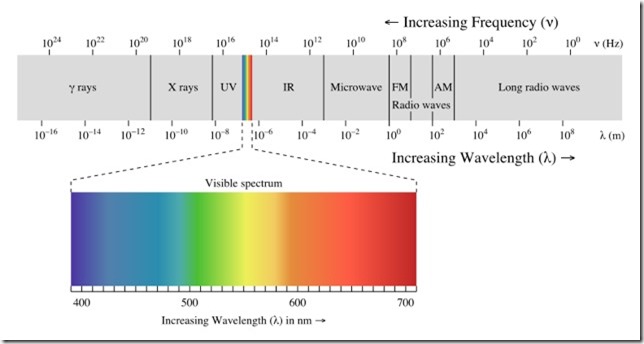 He looked at the image and chuckled. “Did you not know that we define color in terms of how our brains process the stimuli produced by a mix of wavelengths hitting specialized cells in our eyes.
Magenta may not be a single wavelength of electromagnetic radiation in the 'visible' spectrum, but our brain perceives it anyway.” He handed her phone back.

”Do you believe in God?” he asked.

”Have you ever seen God?” he questioned.

”No, I have NOT seen God” she rolled her eyes.

”So, when you were young, you learnt about worshipping a supreme invisible power called God and then someone from your family taught you a method on how to worship and pray to God. I am sure you were also told about things you should not do or indulge in, so as to not invoke God’s wrath upon you. You prayed maybe out of fear on some days, on others you may have done it for seeking a blessing or for a selfish gain”

”And yet, on certain occasions, when you found yourself in trouble and were sinking, a prayer to this unseen God helped alleviate your fears and gave you strength and hope and the power to be resilient and carry on. You closed your eyes and offloaded all your worries onto this invisible power and allowed your faith to guide you” he added.

”But then every religion tries to interpret God in its own way and there is no universally accepted definition or agreed upon form for God either. In the thousands of years of evolution, ever since man imbibed the concept of religion , there has never been a unison amongst the religious preachers and spiritual leaders too on the subject of God. And yet, every human being on this planet has his or her own connection with heavens above. Some pray in fear and reverence, others follow a path of peace and compassion for other people.”

She was quiet now.

”So don’t you think that the existence of God and his ability to help you only resides in something your brain interprets and perceives where as there exists no scientific proof or backing of God as a person to exist.” he concluded.

”Hmm…so, God is magenta perhaps, invisible from the visible spectrum and perceived by brain!!” she exclaimed.

”Hehe”, he let out a gentle laugh and added, “…and perhaps so is love, sweetie” he smiled and held her hand and she leaned back and rested her head on his shoulder “Magenta God, Magenta Love, aren’t we all a little magenta in our souls…”.